Sooner or later, the day had to come that I would leave New Delhi for the road. I think, in some ways, I had been stalling; afraid to take the very leap I had planned for in so many ways for so long. I had taken the riding course and had received my Indian driver’s license. For weeks I had worked with Nanna learning to repair Kali if – and when – she broke down in the middle of nowhere. My final measure was to protect myself from the dangerous people on the road.

India has a history of dacoits, highwaymen who rob wayward strangers, and I had been reading accounts of robberies everyday I’d lived in Indian in every newspaper and magazine I picked up. So, it seemed, had everyone else I knew. Whenever I mentioned my plans to ride solo around the subcontinent, I was cautioned to carry protection. For a long time I wondered what kind of protection would be appropriate for a woman riding a motorcycle. I mean, I was a woman on a man’s machine after all, wouldn’t that be deterrent enough to someone looking for an easy target. One glimpse of me dressed in black and wearing boots that could really hurt you would tell troublemakers I was not “easy.” Still, I could not ignore the years of conditioning my culture had imparted on my psyche, that the world is a dangerous place for a woman on her own.

The words of well-meaning friends telling me I had better arm myself echoed in my subconscious. I knew I would not carry a gun, that would be ludicrous, and a knife would be useless. Besides, I was not capable of plunging a blade into someone or killing him with a bullet. But there was one weapon common to India I thought I could carry: a lathi, also known as a nightstick.

The police carried them and they were easy to buy. I found one and purchased it, then had to figure out how I would carry it. It would do no good packed away in my panniers, so I decided to have a cobbler fashion it a holster that I could strap to my leg. I know, it sounds ridiculous, but at the time I was not thinking about anything beyond satisfying the niggling urge to carry protection. My self-identity had begun to morph in the days as I prepared for departure. The fear of being alone on the road was working on me in mysterious ways. I did not stop to think about what I thought was right, but let myself get caught up in the thinking of others.

With the lathi lashed to my leg, I figured I could draw it like a sword or lance if I got into trouble. I did not know what kind of trouble might find me, but if it did I would be ready to bash it with my stick. In my mind, my enemies would be cars and busses crowding me onto my side of the road, pushing me to the edge. But did I ever imagine hitting a human? 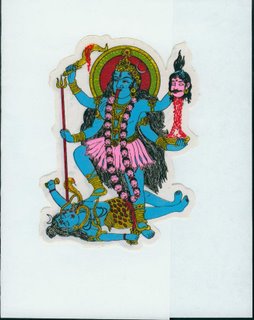 Kali, the goddess of destruction and rebirth, is far more than a naked black woman with four arms, fangish teeth and a lolling red tongue. Although she wears a garland of skulls and a skirt made from the arms of her enemies while she dances in cemeteries tossing her wild hair, her purpose is not to scare but through worship shed light on ones life. Through her, believers can witness the truth of their ways and thinking, understand how they must change and do something about it.

I was not, am not, a follower of Kali, but I did name my motorcycle after her because I believed she was the most powerful goddess in the Indian pantheon of gods; the one most likely to help me through such a challenging journey. What I did not know was what she would show me about myself as I made my way around the edge of the mighty Indian empire. If it is the small things that make a person, I had taken a big step by strapping the lathi to my leg. I had set myself on a course without contemplating the outcome of my actions. And, as I would learn, actions have outcomes.

While it may not be safer for women to travel alone across India, it has it's own benefits too. I'm not sure if you heard...

Translation : In times of need, a Man would see 4 coming forward to help while a Woman gets 100.

Meaning : A Man gets 4 Men to take him to the Crematorium while the Woman if sneezes gets 100 to help!!
-Chetan

I am planning to load up this summer. For as long as I decide to stay out and just go. I to have been thinking about some kind of protection. I took a safety course in Oct. 2004 at the age of 54. I am thinking a taser or pepper spray. Haven’t decided yet. I guess I will continue to read and see what you ran into.